HGTV certainly deserves credit for inspiring a home renovation boom in America, but they also deserve much of the blame for painting a misleading picture of how major home renovations really work in the name of dramatic television. Like Scooby Doo and MacGyver, HGTV has discovered a repeatable formula for engineering each episode almost identically to contain just the right amount of marital tension, corny host banter, hidden home defects, and ship-lap siding to make me vomit captivate viewers, even if that means the whole show is staged, scripted, and dreadfully predictable.

In case you hadn't noticed, here's the HGTV formula:

Don't get us wrong, we're huge fans of rehabbing houses (just check out one of our rehab diaries), but since this reality TV formula doesn't remotely resemble what really happens during a home rehab, we're here to set the record straight for those who are either 1) scared away from home remodeling due to the obvious hidden defects that somehow befall every HGTV project, OR 2) made overconfident in their ability to execute a major home remodel because everything on HGTV always works out just fine in the end. The real reality exists somewhere in between, but since no rehab has EVER gone the way it is depicted on TV, here is our list of the biggest misconceptions perpetuated by HGTV renovation shows.

This one is such a fundamental part of the HGTV formula, it really should be it's own drinking game - do a shot every time an interior wall is removed.  In reality, despite what that real estate agent told you when you bought that chopped-up colonial, opening up walls is no easy feat, and sometimes impossible depending on the configuration of the home.

Yes, load-bearing walls can be replaced by laminated beams, but those beams need to be supported somewhere, and many homes aren't configured in a way that allows the removal of walls without having awkwardly placed columns, supports, or lessened headroom in the resulting space.  The key here is to always consult with an engineer or architect before assuming a particular wall can go.

2.  Demolition is so fun and easy, even Grandma can do it!

Don't be fooled thinking demolition is fun just because HGTV makes it into a music montage like the shopping scene from Pretty Woman.  It's not.  It sucks.  It's dirty.  You need to wear a mask you can't breathe through and goggles that fog up constantly.  You scrape your knuckles, bang your shin, and curse under your breath all day long. Then you need to haul thousands of pounds of debris outside to the dumpster, and once you're finally done, the house looks way worse than before you started, and you will immediately feel overwhelmed and anxious as to whether it will ever be reassembled.

3.  Contractors are totally cool with homeowners randomly showing up and working on whatever they want, whenever they want.

I get it, even homeowners with no construction experience want to feel as though they contributed to the cause.  Unfortunately, that contribution is about as useful as my 2 year old daughter "helping" me install a new kitchen faucet, minus the cuteness. 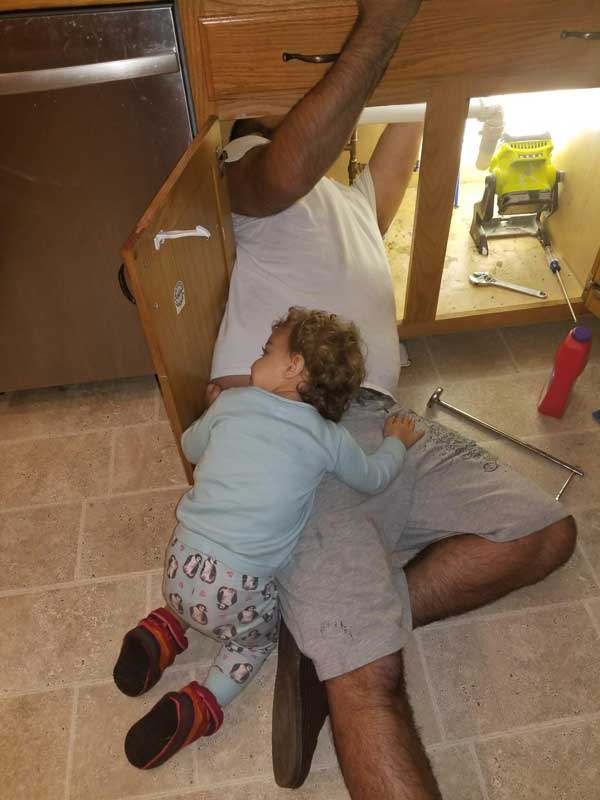 Yes, in theory you might think you're being helpful, but you're probably just in the way and making a mess.  Unless you're exploring a possible future career in construction, resist the urge and let the pros do their thing.  If you insist on being hands-on, coordinate with your contractor well ahead of time, set a schedule with them, and take direction as though you are working for them.

Unless you're going for the Trump golden toilet motif, $100,000 goes a LONG way in home remodeling.  In fact, you can build a pretty sweet addition on most homes for that.  Yes, if you refuse to compromise on trim levels or brands, then expect to break open the piggy bank.  But if you're willing to hunt for deals and make minor design concessions in the name of huge savings, you can transform the typical home into 90% HGTV results for a fraction of the price.

5.  Renovating a home is a great way to bond with the family.

Expect to see this wtf expression on your spouse at least daily during renovation.[/caption] According to Houzz, home renovations make 12% of couples consider divorce. If you're a family that has a hard time deciding where to order take-out on Friday night, good luck with the hundreds of semi-permanent decisions you'll need to agree on during a home rehab. And unless your family works at Home Depot, expect to see a lot less of them once your evenings and weekends are consumed with constant trips to and from big-box stores picking out, and inevitably returning, all those finishing touches.

That statement actually is true, 3D renderings in construction are awesome and incredibly helpful.  The issue is that it takes massive amounts of time, pricey software, and skill to create, and even if your contractor knew how, you wouldn't want to pay him for it.   Instead, expect your contractor to present his design ideas to you in the form of a not-to-scale pencil sketch on the back of a coffee-stained envelope, and expect you to know exactly what he's talking about. Instead, buy a consumer-grade home design software for a few hundred bucks and do it yourself.  You can't use it for actual construction plans and it won't be photo-realistic like on HGTV, but it will give you a workable 3D rendering you can experiment with. 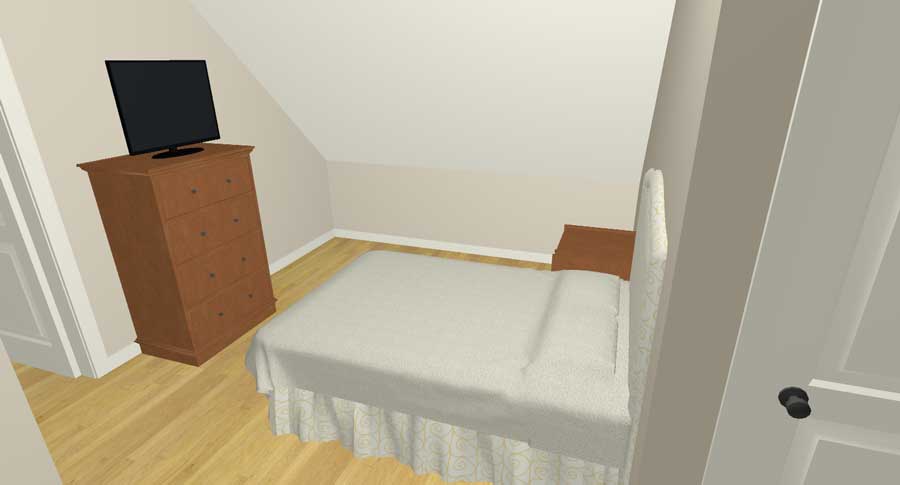 I wasn't sure if this weirdly-shaped room in one of our rental units could be made into another bedroom, so I made this 3D model using $200 software to visualize the flow. No HGTV graphic-designer needed.

7.  Your contractors will rush to meet your construction deadline.

Here's the worst-kept secret in contracting: ALL contractors intentionally double- and triple-book jobs to ensure that when there is a delay on one job, they can keep their crews busy by sending them to other jobs in progress.  They will also usually bail on your project if one of their prime customers (like a developer) has work for them.  This is especially true if the homeowner is acting as the general contractor, because 1) any contractor you hire knows you're not a likely source of recurring work in the future and 2) homeowners are generally horrible at scheduling and planning construction projects and contractors know this and plan accordingly.

This is why the cardinal rule of managing contractors is to make sure they have everything they need on-hand to FINISH the job, because once they step away, you won't see them again for days or weeks.  The only person that will still be painting trim at 2am to hit your deadline is you.

8.  Once renovation is done, your home will look just like Joanna Gaines designed it. 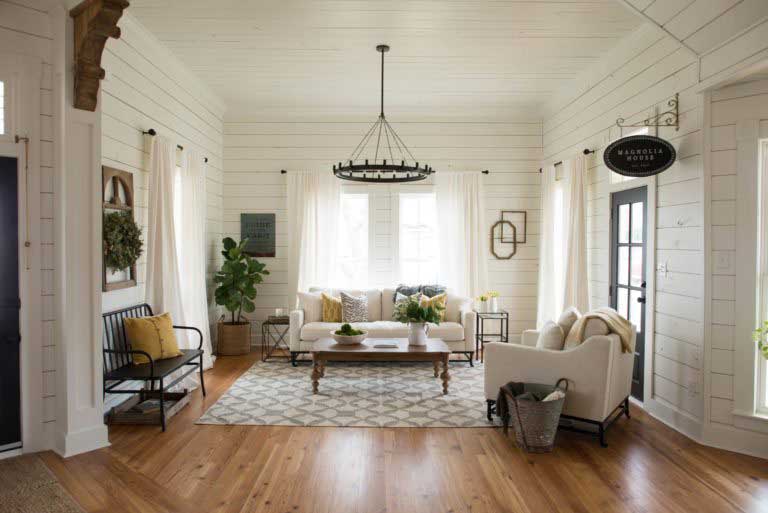 This room looks awesome, I just don't know what you do in it. Sit, I guess? And where do the 7 throw pillows go when you do that? Renovation is only half the battle - the tricky part to achieving the HGTV look is really about choosing color, furniture, decorative elements, and staging - and an awesomely staged home sucks to live in.  Regardless of how chic that salvaged armless upholstered chair you found looks in the living room, you and your guests would still prefer to sit in an ugly recliner.  That $1,500 tile inlay will get covered up by the ragged dog bed.  The white-washed brick fireplace will be obscured by a Fisher Price kitchenette.  Those 25 throw pillows will be laying in the corner on the floor because they're just in the way.

The moral of the story here is to not get too wrapped up in HGTV envy or you'll become frustrated wondering why the process and results of your home renovation went nothing like you had envisioned.  Renovating old homes can be very rewarding, but understand your limits, hire pros when necessary, and be realistic about your expectations.